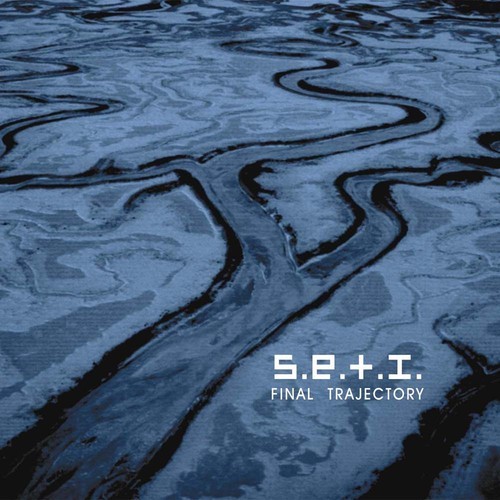 The new album of Andrew Lagowski’s S.E.T.I. begins as a colossal sound wall, like a massive electrical transformer, out of which analogue and digital synthesizer sounds and samples emerge, condense, and crossfade into a deep ambient symphony. The recordings and textures produced over 30 years from 1983-2013 converge in ‚Final Trajectory‘ to produce a collection of monolithic sounds. Invoking a sense of immensity with warm and dark atmospheric loops sounding distant and abandoned in a vast wilderness, battling against galactic winds. S.E.T.I. sets the listener down in this wilderness as an isolated observer; a witness to long intertwining drones, shattered dialogue and broken transmissions, with superior effects chains and a gentle rising dramaturgy forcing the complete album to an astonishing pure data vortex.

As the Voyager spacecraft reaches the outer edge of our Solar System it is a fitting time to imagine the exodus from Earth of the last human being on their final trajectory towards an unknown future. There has been little effort made to prepare psychologically for this one way trip and hallucinatory voices and sounds flit around the traveller, mingling with those of the craft’s entertainment, propulsion and life support systems. Life memories, encounters and events break through the cracks of rational thought like dream fragments, in bursts of barely unrecognisable data. As the craft passes through the mid point of our planetary system on its way out, the occupant thinks they hear a message being transmitted from Earth on the permanently scanning radio receiver.….

Will this be real in our lifetimes? Is the craft being built already in the knowledge that we have little time left on this planet?
If so, where to next?

Review (Vital Weekly):
It seems Andrew Lagowski is back at his SETI for good, and let’s hope the title of his latest work is not something of farewell. Perhaps its his fate, but I can never seem not to mention that great album of his, ‚Knowledge‘, one of the best works in the mid 90s ambient house revolution. But of course beyond that, he released more fine work, not in the least place the dark work ‚False Dawn‘. Lagowksi, either under his christian name or as SETI, is a force to reckon with. The name refers to the Search For Extra Terrestrial life forms, but it also sounds like a space ship. Or at least like a soundtrack for a journey to great unknown, or, but that’s because I recently started to watch the new series of Doctor Who, life inside the Tardis; why doesn’t the BBC ask Lagowksi to program some sounds and/or music to this great sci-fi/humor show? The odd thing is that this one piece, which lasts 58 minutes (why not put in some marker points, I wondered), sounds like a spacious journey. Lagowski uses his digital and analogue synths, with galactic beeps showing lifeforms being present, and you never have the idea that this work was created for the course of thirty years. But apparently, according to the cover it was. It starts out dark, and somewhat louder, like the engine needs an injection, but once we have set off, we are floating freely in space. The vocoder voices find a place in here, less prominent than in those iconic opening moments of ‚Knowledge‘ and it’s one hell of nice trip inside this spaceship. Everything vibrates, moves and, at the same time, is gently audible. Perhaps Lagowski doesn’t change his tune a lot, and to some that’s probably not good – change is good – but instead Lagowski carves out his niche deeper and deeper and gets better all the time. (FdW)

If on the other hand your spectrum of electronic listening lies in a colder environment then Lagowski also listens in and interprets the cosmos through his S.E.T.I. project. A whole ‘other’ experimental ambience Final Trajectory is one 58min 26sec piece constantly moving and shifting through space and time (recorded over 30 years). Anyone with any interest or knowledge of the Universe we inhabit will wonder if this is Andrew’s interpretation of its sounds; his own Search for Extra Terrestrial Intelligence. Or perhaps he’s offering a tool? A vision-soundtrack for any user to headphone up, close eyes, listen, imagine and explore. Just the title alone evokes a journey through space. I imagine a capsule adrift, slow moving through blackness occasionally locking on to an object whereby the sound level increases and vibrates in short bursts before the undertow into nothing calls again. Strange yes, otherworldly (no pun intended) fathomless voices burble indecipherable language. Static pulses. Radio signals, all seemingly untouchable from the shell of a human body as the dark void rolls infinitely on until… End code. We are almost certainly not alone…